One thing though I hope that the weapon appearance is fixed because some of the firearms use the same model, like the Street Sweeper uses the PPSH model for the weapon. I hope this is fixed with the GOTY Edition.Armor wielding totally awesome!

Couple news items coming out of the E3 chaos:

vgBR.com has video of Wasteland 2 running on console from the show floor: https://www.youtube.com/watch?v=qAQOTQAnCy8

I hope no one from these forums dropped by without saying hi to me (though if you dropped by at a time when I was in the other booth or doing press in business area, sorry!)
Thomas Beekers
Creative Producer
Top

Here's a good one: you can catch 20 minute of walkthrough demo and Q&A from the good people of PlayStationClan.be here http://playstationclan.be/index.php?act ... ew&in=2841
Thomas Beekers
Creative Producer
Top

The player is me, I was playing it (on Xbox One) and narrating at the same time.

Yes, friendly fire is still in, risk is definitely significant when your skills are low. I tended to risk it anyway in demos, when it does happen that's fine coz it's another element in combat to talk about,
Thomas Beekers
Creative Producer
Top

Welcome to the Wasteland! We have a new Director's Cut trailer here:

Brian also posted an article over at PS Blog talking about bringing the game to PlayStation 4:

Nice trailer. I like what you did with the mini-screens to display to branching story lines. Maybe a bit too tablet like for the 80s, but it fits with the look of the UI in game.

It's just sad that the youtube compression butchered many of the gameplay sequences. Especially the first few with the running through the scenery. It hardly looks any worse when seen in 720p compare to 1080. Is there any place where an uncompressed version could be downloaded?

Also the screenshot on the ps4 blog: I see what you did there, you cheaters

We are running a Thunderclap for Wasteland 2: Director's Cut! After our great success with reaching tens of thousands of people with our Bard's Tale one, we had to come back and try again: https://www.thunderclap.it/projects/319 ... -dc-launch
Top

Not bad! Not bad at all.
Two rite whiff care is quite a feet of witch won should be proud.
Top

Such a shame that the crab cars will never see the light of day. 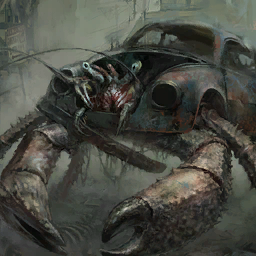 Not bad! Not bad at all.

I am currently working on french subtitles for your french fan-base.
Do you have the transcript of Brian's text somewhere ? That would help me a lot.

Otherwise, I'll do it myself -> https://fogen.titanpad.com/45

Many thanks and good luck for the launch of W2-DC !

A couple news items to share with everyone today.

First up, we have the Xbox One version of Wasteland 2: Director's Cut available for preorder on the Xbox Store! You can grab it here: https://store.xbox.com/en-CA/Xbox-One/G ... 8b085d99e7

Next, Kotaku has published an article talking with Brian about Wasteland, the "true origin" behind the Fallout series. It's an interesting read, going over a bunch of Wasteland's history and the references found in both games: http://www.kotaku.co.uk/2015/10/02/unco ... ue-origins


The Brotherhood of Steel is a practically identical military organisation to Wasteland's Guardians of the Old Order. Both are quasi-religious (or overtly religious in the case of the Guardians of the Old Order), both use and preserve old technology, both are extremely xenophobic, both have a propensity to build fortified bunkers, sometimes in the sides of mountains.

Power armour, which is "a huge deal in Fallout", as Brian says, appeared in Wasteland first. "That was inside the Citadel [the Guardians' base] in Wasteland, it was one of the great pieces of armour towards the end of the game," says Brian.

When you die in Wasteland, you get an on-screen message saying "Your life has ended in the wasteland". In Fallout you get an image of a picked-clean corpse – and, sometimes, the exact same words. "We took the message verbatim," Brian says.

There is a Desert Ranger named Tycho in Fallout, whose grandfather was also a Desert Ranger. In dialogue, Tycho mentions a "fat freak" from Las Vegas - a direct reference to a character called "Fat Freddy" from Wasteland. Freddy was a crime boss, and I feel compelled to share the description of him from the story-book that came with the original Wasteland, because the writing is so delicious: "Fat Freddy is a genetic nightmare - a squamous mass of slimy flesh shuddering and twitching before you like some animated blob of flesh-coloured jello. He smells like a swamp, a foul, choking miasma of rotting mastodonian flesh left to putrefy."

The dreaded Deathclaws in Fallout were taken from Wasteland's Shadowclaws. They look kinda different, but are both lizardy, mutated and dangerous. Ghouls also came straight from Wasteland, in various forms.

Great article, i especially liked the section about the martian invasion in-jokes. Didn't realize they were all tied together in a big series spanning running gag.
Given the current situation, in retrospect it's also kind of ironic, that fallout was first created, because Brian couldn't get his hands on the Wasteland license.
But dare i say, despite their shared heritage, i'm glad that fallout and wasteland are two distinctly different series in style, pretentation and gameplay in 2015. There's never enough post apocalyptic games around, anyway

Talking of style, i think i mentioned it before: the quirky 80s Wasteland setting in 2015 radiates a comparable retro charme than the 50s retro setting of fallout did in 1997. For some reason i thoroughly enjoyed the idea of maintaining radio towers with lowtech equipment throughout the wasteland to be able to stay in contact with the people the rangers try to protect. Looking at my mobile phone, this setting refreshingly seems ages apart from nowadays, yet the fear of a loss of connectivity is greater in our current times than ever.

So yeah, well done, putting that radio in it's prominent position throughout the game.
Top

Gruftlord wrote:Great article, i especially liked the section about the martian invasion in-jokes. Didn't realize they were all tied together in a big series spanning running gag.

Oh, the Martian thing was masterful. My brother and I scoured the game, trying to figure out how to get to Mars. Especially with how they kept mentioning Finster.
Alwa nasci korliri das.
Top

One more for the road! Today we have a new trailer showcasing squad creation & tactics with Brian: