And now, a quick design fireside chat. This one is something many of you have been asking about.

Many dungeon crawls, including the original Bard’s Tales, make use of a front row/back row system within combat encounters. This type of system allows you some tactical choice to how your party is presented in combat. For example, you can shield some “softer” characters like ranged casters in the back row, which allow them to be protected by stronger adventurers like a warrior. The rules generally state that if there are player characters (PCs) in the front rows, they will take short melee damage before the PC’s in the back do. Of course, ranged weapons and spells can hit back row PC’s regardless of the front row. Commonly this would also apply to the player’s attacks, the back row only able to use spells and ranged attacks.

This system has been used many times prior, with varying levels of modification and effectiveness. It has been rooted in dungeon crawl history and so we will of course have it as a core mechanic in BT4 combat, but there’s also some improvements we can make. For example, it tends to introduce an overly limiting “hard rule set” to the type of party you can make, restricting your choices during character creation. As stated in a previous update, an overarching design goal is to allow players to experiment with many different party make-ups.

To that end, we’ve been working on a system that satisfies the following design goals:

The news about the combat structure is pleasing. I may be able to get on board with 6 character slots, if one isn't exclusively reserved for an NPC, and it sounds like that may be the case... The concept of the 'neutral' space is interesting; and if all this isn't expicitly presented visually, I think it can still very much feel like the classics.

I'm not all that excited about the stretch goal stuff, since it's all been focusing on meta/out-of-game type content or developers who I'm guessing most people have no clue about and thus not really drumming up as much excitement as potential game content could... which is not to downplay the significance of having experienced professionals on board, but I think there could have been more excitement were some of the stretch goals more relevant to nostalgia - like bringing back certain locations, past characters, etc - rather than nifty unrelated stuff that some people might think could be cool to have, but probably most game players wouldn't make more financial sacrifices to get =/

I dunno. Really, dunno what would have been good stuff to drum up a lot more excitement and support; for a game wanting to remain true to classics (not be wildly unique and new), and yet offer new things to add to the game that people would increase support for, it's sort of a rock and hard place

So it's now looking like 6+2. Hopefully, the 6 party slots will be more versatile than 5+1 (something like you must have at least 1 PC in any slot/position but otherwise the remaining 5 slots can be a PC or NPC).

Moving a party member up to the front in the middle of combat (without losing another first) is a new thing for BT. I wonder if this is a "free" move so they can still act within their phased turn.
Top

I'm a little worried about having to move a mage to the front row to use a spell on a melee foe. I don't think we really need touch-range spells.
Alwa nasci korliri das.
Top

Interesting, but very untrue to the originals. Let's see: 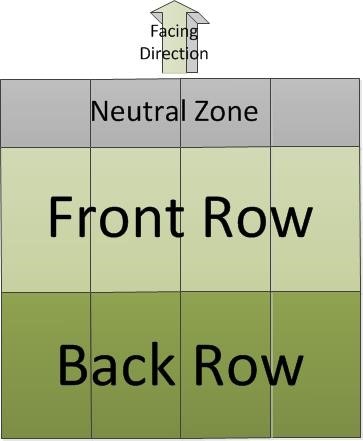 That would mean each sub-grid is 3’ wide by 5’ long, with a 2 foot “neutral zone” left to fill in the remaining large grid square.

The image and the description don't match.


The neutral zone would be a great spot for things like magical shields or other non-player character physical spells.


Paladin buffs could give additional bonuses to PCs in adjacent sub-grid slots.

Been playin' a bit of Lords of Xulima i see...


Rogues could be masters of movement, swapping places with other heroes or summons, giving more positional freedom.

And WoW too. By the way masters of movement should be the chronomancers.

Needless to say, i'm not too impressed. Feels like mini Heroes of Might & Magic, Lords of Xulima, or King's Bounty. Minus the emphasis on initiative, of course. What it doesn't feel like is classic blobber combat.
Top

ZiN wrote:Interesting, but very untrue to the originals. Let's see:

Max 8 would suck. I don't doubt the spells would have to be reworked anyway, given the new 3D environment visualizing what before was just text. An effective combat distance of 14 feet is rather sad (a rear party member takes up 3x5 but from the edge of that grid to the edge of the farthest enemy grid you only have 14 feet).

Also, what if combat began with a zone between the neutral zones? That is, combat can start when perception kicks in and the respective grids start out apart? Max ranged distance can then be applied at x feet and a choice one can make is to either attack or close the gap (mutually exclusive, so melee characters can't attack at all and essentially get skipped until the neutral zones combine).

That would mean each sub-grid is 3’ wide by 5’ long, with a 2 foot “neutral zone” left to fill in the remaining large grid square.

The image and the description don't match.


The neutral zone would be a great spot for things like magical shields or other non-player character physical spells.

Image and description match. You have four 3x5 grids per row for two rows and one row of four 3x2 grids (2 foot zone is about the length). All three rows together give you a 12x12 "large grid square".

The neutral zone idea is odd but I think this is in place primarily to establish spacing within a 3D environment. Otherwise the enemy would be in your face and you wouldn't be able to see much separation. Combatants holding shields or other weaponry, including physical spells that might mean something like a Green Lantern ring created hammer or some such, would have to occupy this space as well so as not to clip the player models.

In other words, this is all about accommodating visualized combat.
Top

Thanks for the explanations, got it now.


paultakeda wrote:What if what they aren't saying is that the enemy grid is not 12x12, but rather 12x12 minimum and really could be 12x17, 12x22, 12x27, etc. In fact, if they keep the max four groups rule, then the enemy grid might max out at 12x22, which would give you a max effective range during close combat of 24 feet.

Now that would be more like it, but still a lot more confined than the original 90' range.


paultakeda wrote:I don't doubt the spells would have to be reworked anyway, given the new 3D environment visualizing what before was just text.

Well, the 3D visualizing is why they shouldn't be reworked: Those spells would look and sound fantastic in 3D.
Bard Songs ║ BT4 Beta Playthrough
Top

Is this 1 square to 1 character confirmation that we will not face individual encounters of large numbers of enemies?

If the player and enemies both have these grids then they have a max of 8 enemies faced.

Roger Wilco wrote:Is this 1 square to 1 character confirmation that we will not face individual encounters of large numbers of enemies?

If the player and enemies both have these grids then they have a max of 8 enemies faced.

They explicitly suggest there may be more positions than are displayed by the chunks in the image.

Still, it suggests some kind of ceiling on quantity of opponents which is not enormous.
Top
Post Reply
9 posts • Page 1 of 1