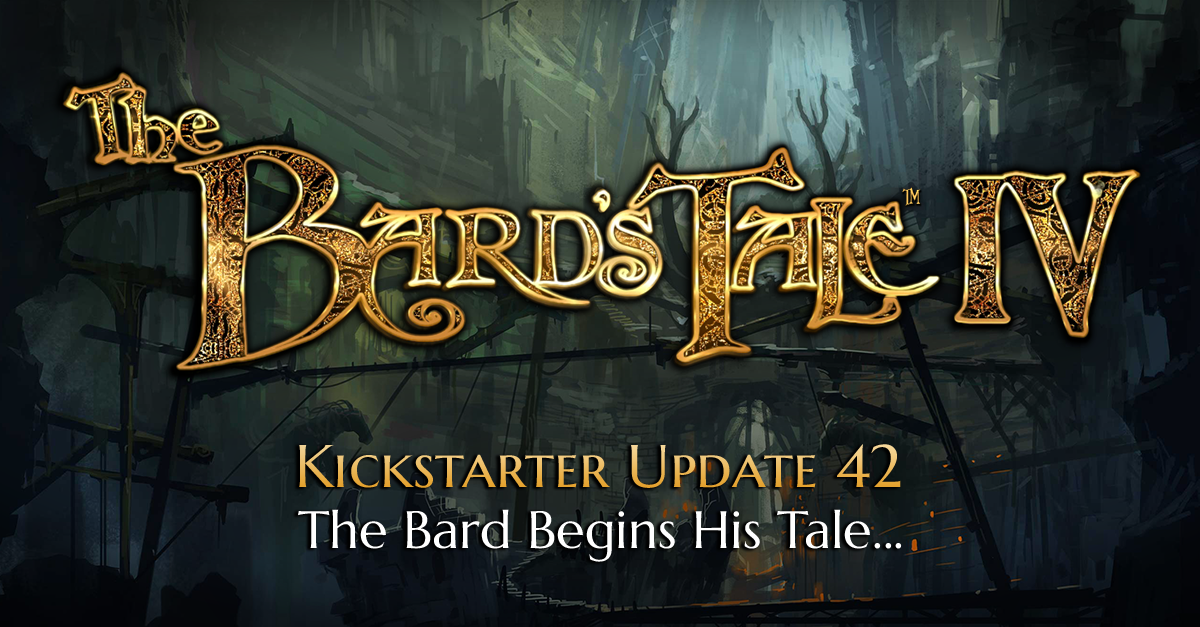 In this latest Bard's Tale IV backer update, we share important news about the backer alpha and announce the full name of the game!

And thrice did rise
Brave heroes, wise
To drive them all away

In dungeons vast
Do these evils past
Their ancient secrets keep

I hate to sound like a cranky grognard, but why? Did you really pick a subtitle just to tell people what kind of game it is? Gears of War 5: Waist High Wall. Fallout 5: Post Apocalyptic 50s. Thief 5: Sneaky Stealing. Doom 5: SHOOT SOME FUCKING DEMONS!!!

It just seems yet another needless change. It also leaves me to worry (again) about the story. Also...

That said, I am looking forward to the Alpha. Um... I think I bought that level. I honestly don't remember. I should check.
Alwa nasci korliri das.
Top

I guess we're dropping the idea of focusing on a character in the party, then? I was looking forward to "Bard's Tale 4: The Monk's Habit."
Top

Indeed, unless Skara Brae was an unreferenced 'city of the plains' per Bard's Tale 2's wilderness, elsewhere in the "realm", Bard's Tale 2 had absolutley zero reference to Skara Brae. That would be a little correction to make in the BT4 lore, if adopting the BT1-3 stories as prelude to BT4.

There was 1 reference to Skara Brae that I can find, in the BT2 manual at the beginning of Saradon's letter.


I have to say, I like the sound of Barrows Deep, though it does seem pretty typical, not really hinting or teasing at something unusual or mysterious. It has a very Lord of the Rings type of fantasy feel, but as Drool mentioned it doesn't really follow the legacy of the past games' subtitles.

I do like the idea better of referring to a 'hero' in some manner as 1-3 did. The "bard's tale" is (are each) about the people, not a location. Even if the hero is not directly a 'class' (the Destiny Knight was another name for the archmage-turned-ultimate-fighter with the wand, the Bard is the hero in BT1, and the Thief of Fate referred to the easy/intended way to win by using the thief's unique skills). Unless the "Barrow" is a unique creature or being that'll become pivotal in the plot. lol

So, the plus: I like the sound of Barrow's Deep. But honestly that's about as far as it goes (again coming from the perspective of a sequel being true to the originals)

Paul, that was one of the sub-factors actually. "What, do we want to be reduced to 'Geomancer of Karma' at some point?"

By using this revival game to break the mold a little with the subtitle, it now opens more avenues to do new things *and* safely return to old throwbacks like The Destiny Knight without locking ourselves into a downward spiral toward "The Monk's Habit"!
Top

You don't have to "focus" the gameplay on a character class. I agree that that would be detrimental (though it apparently worked a treat for The Mage's Tale).
You could still keep to the naming scheme by referring characters who are integral to the story but not technically a character class (king, sage, scholar, inquisitor, you get the idea).
Ah well. I'm more surprised than bummed out by the name choice. It's no big deal.
Top

Oh, and I have to say I am impressed by the song/poem.
Top

I'm in the same boat. No clue if I backed the Alpha level or not.

Ah, just checked, and I didn't. I wonder if it can still be added on (or at least, beta access), or if that's locked down now. I didn't immediately see a way, but I didn't look very hard either.
Top

A lot could have been done with the nomenclature. As mentioned, the first game related to the importance of the bardic class, back when CRPGs didn't really emphasize that, nor had the actual compositions playing. The second was for an arch class, and the third did get to an actual class in the party. You could also have used it to identify the villain, or a protagonist NPC, or some other individual, maybe even the mythology of a story and not a character in it.

I still like Legacy of the Stars ;) A quaint followup to the wrapup of the trilogy.....
Visit BardsTaleOnline.com - your community Bard's Tale classic RPG resource!
Twitter: @BardsTaleOnline / Facebook: Bards.Tale.Online
@thebruce0
Top

I wanted The Bard's Tale IV: Pool of Radiance (But Not The One You're Thinking Of, The Other One). For some reason, they didn't go with that.

You're right that we could have done any of those things, but then that's why I'm cool with what we went with at the end of the day. By tweaking the tradition a little, it opens it up for us to do something like that easily next go around (or to turn around and do something along the lines of Bard/Knight/Thief). There were plenty of suggestions along all those lines, but ultimately the team wanted something that they liked and felt symbolized the exploration elements and down into the depths danger of the game.
Top

Normally these numbers would be concerning for BT4, since the Torment alpha barely seemed worth the devs' effort with a far bigger audience.

But since we're so close to release already, this might be closer to a small preview of the beta than a "real" alpha.
Top

I'm sad there isn't a character class in the title - there are so many left to use that could have been great - but what's in a name anyway? I think the forum community should think up their own subtitle and we can call it that among ourselves. Now let's just see if we can agree on one

Given all the "tweaking the tradition" that inXile has done in other aspects of the game that have been seen so far, I'd be more concerned about choosing an appropriate title than subtitle. Something like "Auld Scotland: The Bouncing Bobbleheads' Tale", perhaps?
cmibl<enter>
Top

Having played real Alphas, I wouldn't complain about something like that. The last alpha I played wasn't even a vertical slice yet. It was barely more than a tech demo.

I'd be hip to that. Or perhaps, Puddle of Luminescence.


but ultimately the team wanted something that they liked and felt symbolized the exploration elements and down into the depths danger of the game.

It still strikes me as a weird choice. I mean, how many games put their subgenre in their subtitle? Perhaps it's just me being cranky, but something like "Thief of Fate" seems more evocative than "Barrows Deep". Also... the more I look at it, the more I feel kind of confused.

Holy cow, that's it! The vampires from Tenebrosia Tar Pits! No, wait, that was Barlow. Nevermind.

Or just a Middle English / Old Scots thing. A lot of languages place adjectives after nouns, including older forms of English, in many cases.
But, yeah, I don't think the subtitle feels right either. It is contradictory to some extent, since a barrow is a mound, which is something rising out of the ground, not going down into it for any considerable extent. "The Barrows High" would be less contradictory. The entombment passage tunneled into a barrow could be deep, I suppose, but that is not technically the barrow proper.

But, I'm not going to waste much effort on the subtitle, since I think the title doesn't fit the game that they are making either.

I hope not. Then we'll have people running around thinking that the barrow wights of Arnor in the LotR are called "barrows" for short.
cmibl<enter>
Top

It's capitalized in the poem so it looks like it is indeed a proper noun. If I got used to Saints Row I can get used to this.

_noblesse_oblige_ wrote: ↑March 13th, 2018, 5:58 pm A lot of languages place adjectives after nouns, including older forms of English, in many cases.

It is contradictory to some extent, since a barrow is a mound, which is something rising out of the ground

I also read it as a place name: there's a location called Barrows Deep. *Edit*: There's a place called Barrow Alaska, though in that case it was named after a person, and there are names like Tacoma Narrows, or Challenger Deep, or what have you. So it fits in that spirit.

I don't mind the title. Maybe it's a hidden cave network under a barrow? It has the ring of a locale you'd want to explore, and a little handwaving goes a long way, with names.

I'm more interested to see if something has happened with the weird portraits, when people get their hands on the alpha / beta releases. Or at least, if it's moddable somehow.
Top

The description for the GDC booth is now live:

Utilizing Unreal Engine 4, The Bard’s Tale IV: Barrows Deep represents a graphical leap forward in the RPG dungeon crawler genre, immersing you in a highly detailed and lush world you'll want to map to its farthest reaches. inXile uses photogrammetry to create in-game 3D objects from photos of architecture, taken right in Scotland. With the Bard leading the way, the game has a strong focus on sound design and music, the latter inspired by and involving Gaelic musicians.

The Bard's Tale IV: Barrows Deep is built to scratch that classic dungeon crawler itch with the use of modern design principles and top of the line graphics, breathing life into this iconic series for fans old and new. As inXile CEO and series co-creator Brian Fargo notes, "When we originally created the first Bard's Tale, the visuals were such that we had to rely solely on our imagination. Seeing Bard's Tale IV: Barrows Deep in the Unreal Engine is something we could only dream about back in the day."