Wasteland 3 Update #25: You Reap What You Sow

Wasteland 3 Update #25: You Reap What You Sow 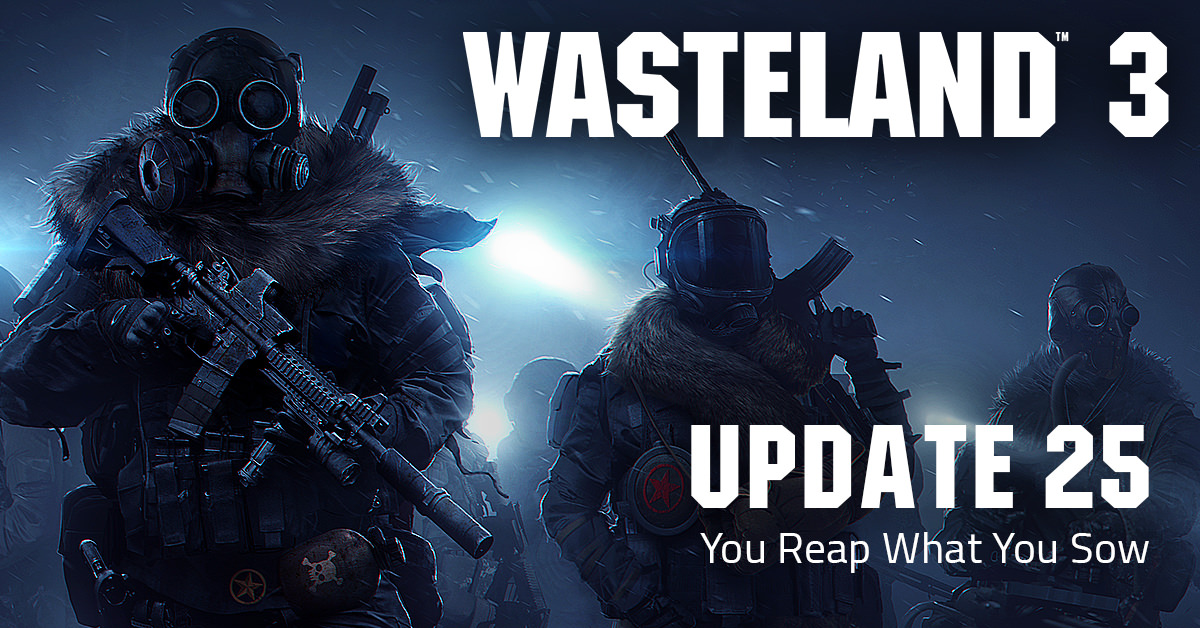 In this latest update, we take a look at the Garden of the Gods, celebrate Wasteland turning 30, answer a few questions, and mention the arrival of Wasteland 2 on the Nintendo Switch.


In the real world, the Garden of the Gods is a park in Colorado Springs, famous for its towering red rock formations.

In our post-apocalyptic version of Colorado, the Garden still exists, but now it’s the site of an eccentric science project.


Q: What will the Rangers look and sound like in dialogue? Will I see my cool Rangers with their custom appearances close up, "Mass Effect" style? Will the Rangers be voice acted? If so, will the player have a number of voice packs to choose from, or will it be more like "You are Troy Baker, deal with it"? Can the player choose which Ranger is speaking? Can they change which Ranger is speaking mid-dialogue like in Wasteland 2? Or is there a permanent "spokesman"?
A: For regular conversations, you will see your party members from the normal top-down camera view. For cinematic conversations, we're still experimenting, but at this time we're not planning on voice-acting your player characters during conversations. Different party members will be able to speak during conversations, but we've streamlined the interface so that you don't need to pick a specific character - the game will pick the most appropriate character for each line if you meet the requirements. Of course, the companion NPCs who join your party will be able to interject during conversations as well, and they might sometimes surprise you with their insight.

Thanks for answering my question!

VERY GLAD that full voice acting isn't planned. Not being sarcastic, this is the right choice.

It's fine that the game can switch characters for me for "specialist" dialogue, e.g. if a Smart Ass line is chosen, the Smart Ass character says it. I hope I will still be able to choose who's speaking for normal, non-specialist dialogue instead of the game "assigning" Character #1 to be my spokesman. I don't mind having a default speaker, I DO mind if it's locked. It's nice that we don't NEED to click on someone and a character will be chosen for us, but if I WANT to click on someone, please let me. I hope I'm clear about this.

And I do hope that we'll get to see the PC that is speaking.

Q: Could there be an update concerning the multiplayer portion? I'd just like to know how the homebase would be shared - companions, items? Are we playing separate squads that impact each other or two halves of a whole? If wanted, can I load up and walk through the whole game with my friend, or will there be times we can't be in the same location at once?

A: When playing multiplayer, your party is split between both players, with each player controlling a number of Rangers. The details may change as we continue to play and iterate, but right now, players can freely allocate party members between one another, with the only requirement being that each player must have a minimum of one player-created character in their party.

Does the phrase "your party is split between both players" mean that the two multiplayer groups are just one singleplayer party split in two, like in D:OS? If so, can the two halves of the party be active on different maps at the same time?

by Grohal
Ah, the Long awaited update. I like what I read and can't wait to try it out on my own.

by Serjo
And why is the video only available in 360p?

by phimseto
The video was meant to be a short clip in-line with the update text to set the stage. It was originally intended to be a gif, but we had to convert it to a video at the last minute due to some compatibility issues. We didn’t really intend for it to be viewed full-size or as a trailer, more of a teaser.

by Highwayman667
The new Ag Center ?
All times are UTC-07:00
Page 1 of 1
Powered by phpBB® Forum Software © phpBB Limited
https://www.phpbb.com/