by sear
Hey all,

Today's update brings some new lore from George Ziets about the Dunes of Thoughts, as well as a fully 3D interactive model preview for a character we showed earlier! 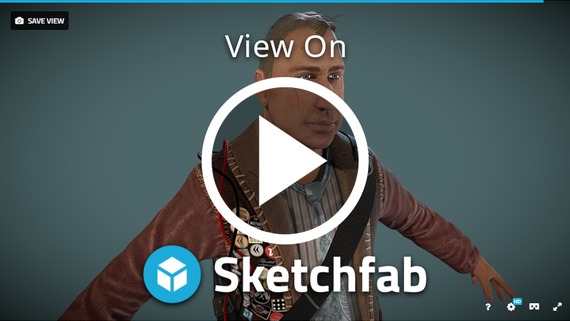 [From the letters of Doctor Ellen Buchanan, dated 2022 - twenty-five years after the bombs fell. Housed in the Patriarch’s personal archive, Colorado Springs.]

I’m writing this from the passenger seat of an old, prewar pickup, not far from the ruins of Fort Garland. It’s April, I think… almost two years since we embarked upon this project to survey what’s become of our world.

My driver is a silent, pale-skinned man, his bald head mottled with scars and radiation burns. His coveralls have been mended so many times that I’ve taken to calling him Patch. He never speaks, so I don’t know if he minds the name, but I hope he doesn’t. Ever since the death of Dr. Herrera, he’s been my sole companion and friend.

A few days ago, Patch and I reached the edge of a barren expanse. Sand piled in vast, sweeping dunes at the edge of the mountains. This was once a national park that had been turned over to a group of scientists – not university professors like I once was, but a private foundation. They’d fenced off the whole area, and no one was allowed inside.

Of course, my curiosity immediately got the better of me. I told Patch to stay with the truck, and I set off alone.

At the edge of the dunes, I found toppled fences and guard towers, probably abandoned when the bombs fell. As I climbed over the ruins, I saw flickers of blue light from the sands beyond.

by Drool
That's great and all, but you guys keep not answering the burning question.

by Zombra
The "bit of everything" left me somewhat disappointed ... I can think of at least one thing that was left out entirely

On a positive note, I'm very much enjoying the Ziets stuff, and the Dunes of Thought are suitably intriguing.
All times are UTC-07:00
Page 1 of 1