by sear
Today we have a new update from Maxx Kaufman talking about creating our "talking head" characters for Wasteland 3!


The process starts with a written description from the writing/design team, which contains a broad description of the character, goals on what role he or she should play, if they should look friendly, intimidating, etc. The artist and art director take this document and have a back and forth to define the character’s look. We ask ourselves questions like: What is interesting about this character? How are they unique? What would be good reference points for the character’s look? For example, early on in this discussion we realized a good reference point is Fallout 1 & 2’s talking heads. Rather than being photo-realistic, they have a stylized and slightly exaggerated look that has meant they aged very well. We went and combined that with with today’s technology, something we like to call tweaked realism. 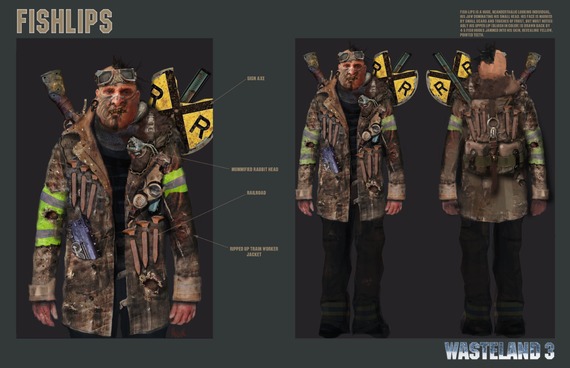 This concept piece is then passed around the team. Brian Fargo and the project director Chris Keenan comment, and of course the writers see if the art meets the character’s needs. Once any revisions here are done, it’s time to create the character.

The task is given to the modeler, with specific instructions on what is important, what the character absolutely needs to have and can’t have, but also some freedom to improvise and add their own flourishes. We also need to know at this stage how the character needs to talk and move, because the model needs to account for future rigging and animation work.

by dorkboy
That's so true regarding the FO talking heads aging well. Looks quite promising!

I think the FO talking heads also side-stepped some of the "arm-wavy craziness" by being fairly up close and vertically cropped, as well.

dorkboy wrote:I think the FO talking heads also side-stepped some of the "arm-wavy craziness" by being fairly up close and vertically cropped, as well.

FWIW, I thought the gestures and body language in A Frosty Reception were great. It just comes across as crazy because the guy looks like a Warcraft orc ... which is fine for one character ... although "Mister Funtimes" does too, in fact ... tiny eyes, tiny forehead, huge jaw. I hope the art team realizes that super mutants weren't the only characters in Fallout. I'd like to see some who look more like humans.

Or, to bring it back to a series that actually matters

Wasteland did have that one guy who looked like an orc, but most of the characters had humanlike facial proportions.

by dorkboy
@Zombra
Yeah, I'm definitely in the less-is-more camp when it comes to exaggerated proportions. It would be disappointing if all the characters ended up literally pear shaped - with the gender determining which direction the pear is pointing. So, if the two characters in the update aren't just random examples, but actually what we can expect from all the male characters in the game (square jaw, small eyes, skull narrowing towards the top), then I totally agree.

As for the arm waves, I don't think the facial features affect that much at all - but looking at 'A Frosty Reception' one more time I see that it's even more up close and vertically cropped than I remembered it to be. Maybe it's due to different parts of the brain interpreting facial expressions and bodily gestures, but I generally find that you can get away with a lot more simplicity in the face than in gesticulation - without looking like a robot, I mean.
IDK, maybe it's just me being weird - I get annoyed when people point at maps or screens in movies, too, because it typically looks so phoney and contrived. Makes me wanna shout "Nobody points at maps like that!

Nah, it's not just you. There's certainly an "uncanny" thing going on here ... but I think it's good that they're exploring expression through motion. I'd rather they overdo it than have guys standing around like mannequins.

Just as long as they stop making everyone look like orcs. [/agenda]
All times are UTC-07:00
Page 1 of 1
Powered by phpBB® Forum Software © phpBB Limited
https://www.phpbb.com/