by marjane
just consider this fanfic as some kind of dank meme style without any insults, provocations. Just being silly.

If this post is against any rules, let me know, i will delete. 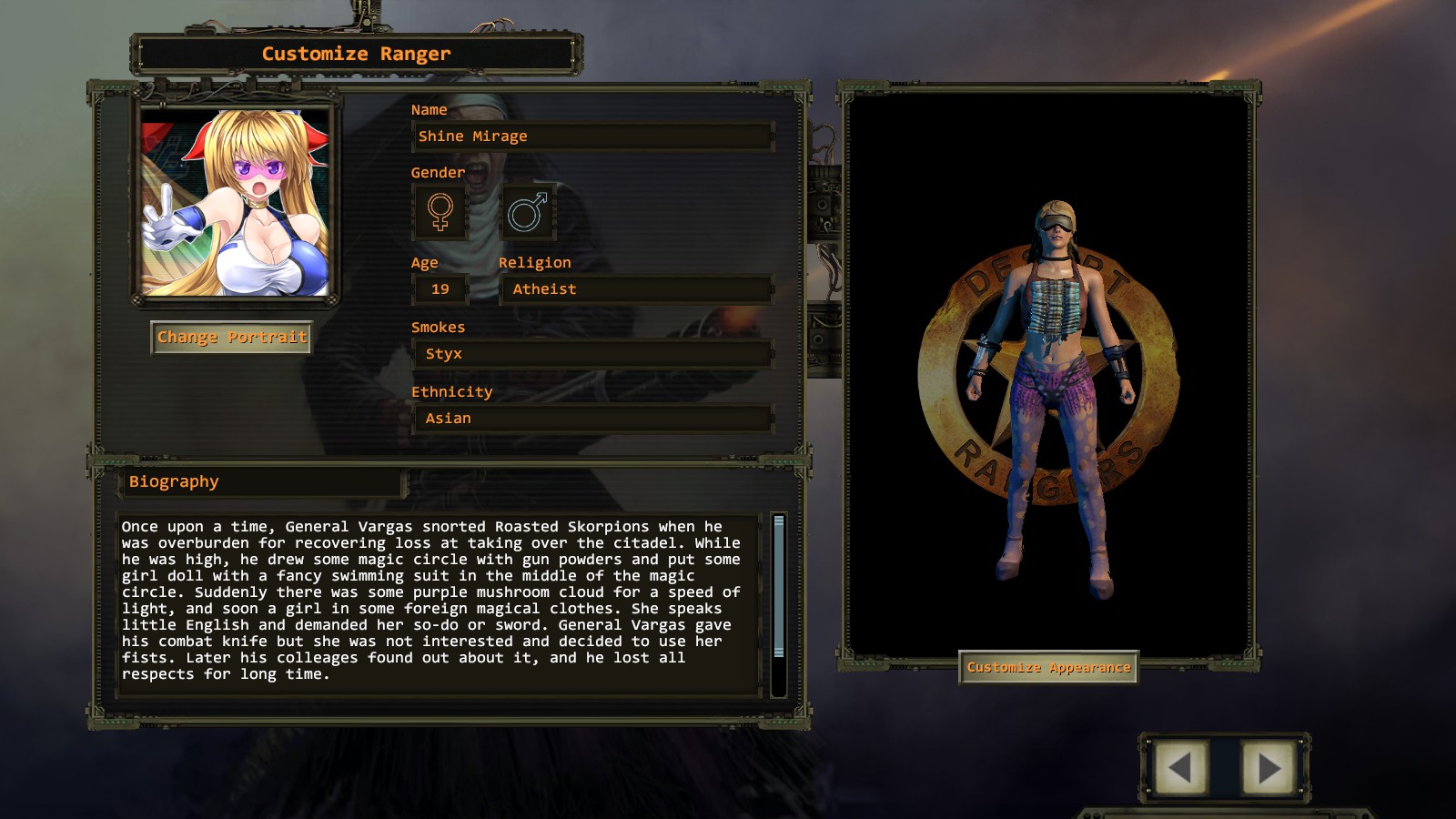 What I wrote in this Ranger Biography.

Once upon a time, General Vargas snorted Roasted Skorpions when he was overburden for recovering loss at taking over the citadel. While he was high, he drew some magic circle with gun powders and put some girl doll with a fancy swimming suit in the middle of the magic circle. Suddenly there was some purple mushroom cloud for a speed of light, and soon a girl in some foreign magical clothes. She speaks little English and demanded her so-do or sword. General Vargas gave his combat knife but she was not interested and decided to use her fists. Later his colleagues found out about it, and he lost all respects for long time.

Her sword is gone, time to beat shits up by fists.


The moral of the story - Don't do drugs seriously...

p.s. drinking tea or coffee could be better instead of drugs. she is one of the full melee rangers (I nick them as Psychotic Lasses) for Supreme Jerk difficulty. I might add more if someone want to know rest of them. 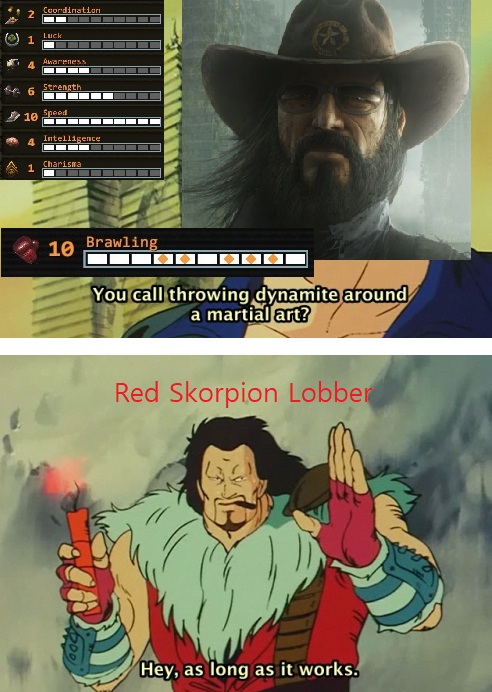 Please do. I don't know what the hell I read there, but I liked it. Plus I had recently considered having a ranger that actually specializes in explosives, rather than any of the other weapons.

by marjane
Okay... here goes rest of them.

Not a dope as first one, but still messed up in some aspects. 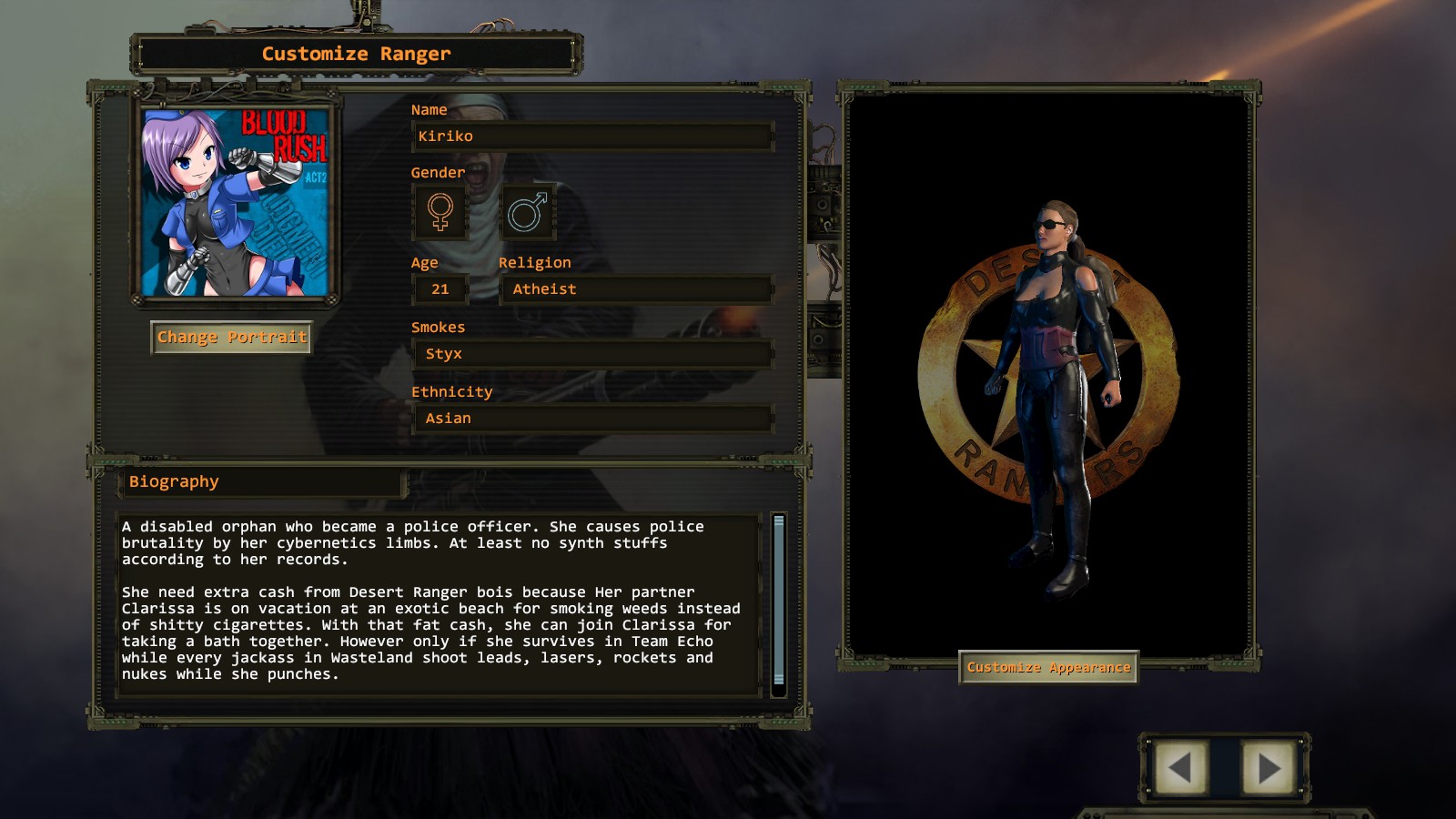 A disabled orphan who became a police officer. She causes police brutality by her cybernetic limbs. At least no synth stuffs according to her records.

She needs the extra cash from Desert Ranger bois because Her partner Clarissa is on vacation at an exotic beach for smoking weeds instead of shitty cigarettes. With that fat cash, she can join Clarissa for taking a bath together. However only if she survives in Team Echo while every jackass in Wasteland shoot leads, lasers, rockets and nukes while she punches.

the moral of her story - Safeword is police brutality, wait, is there police in Wasteland? 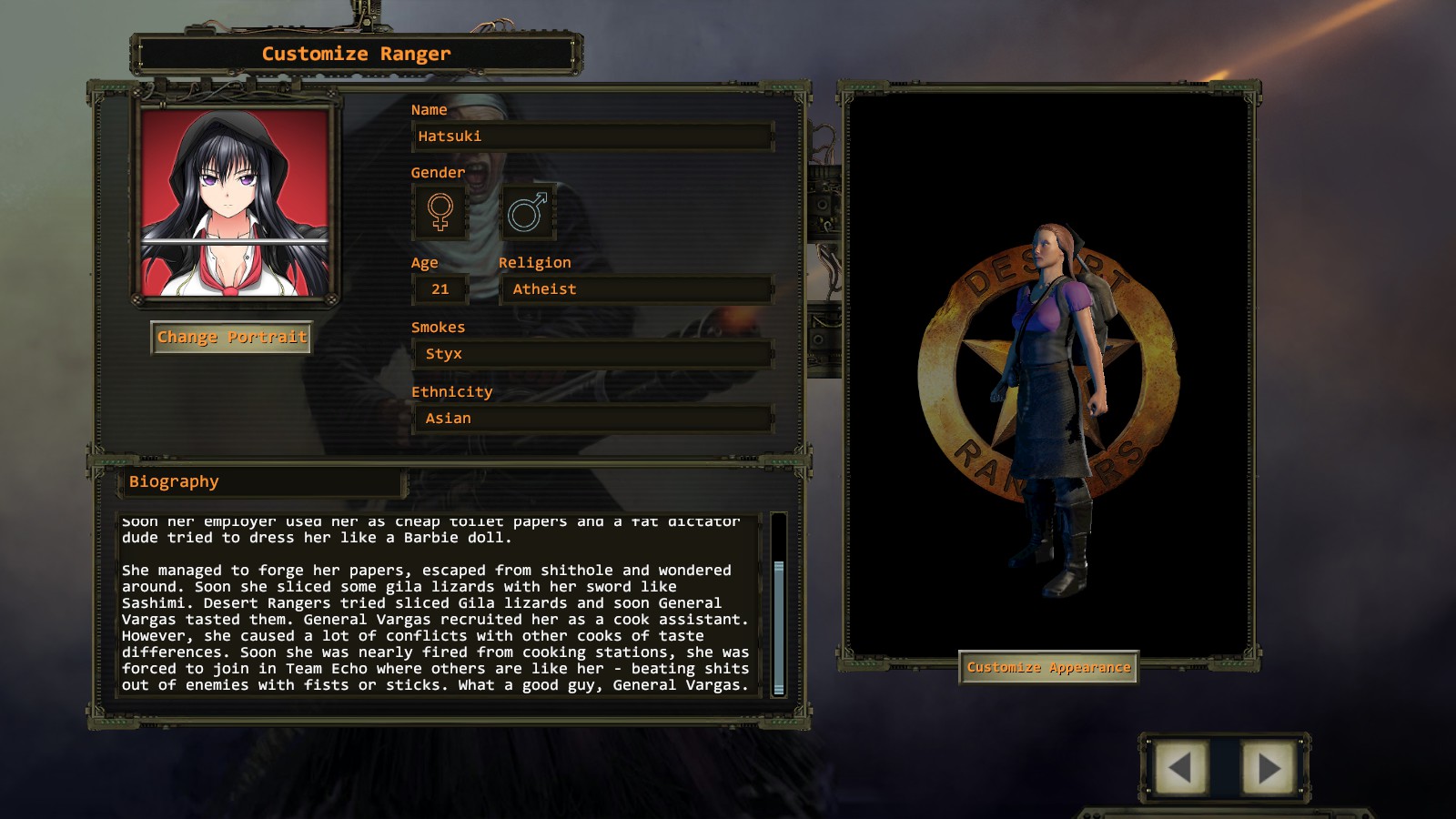 A famous assassin with holding a foreign sword. She was known as "Black Death". That was until some clicky boi chooses worst choices in her situations without considering what the heck are they.

Soon her employer used her as cheap toilet papers and a fat dictator dude tried to dress her like a Barbie doll.

She managed to forge her papers, escaped from shithole and wondered around. Soon she sliced some Gila lizards with her sword like Sashimi. Desert Rangers tried sliced Gila lizards and soon General Vargas tasted them. General Vargas recruited her as a cook assistant. However, she caused a lot of conflicts with other cooks of taste differences. Soon she was nearly fired from cooking stations, she was forced to join in Team Echo where others are like her - beating shits out of enemies with fists or sticks. What a good guy, General Vargas.

moral of her story - Even Rangers love Gila Lizards sashimi as long as good cooks did it. 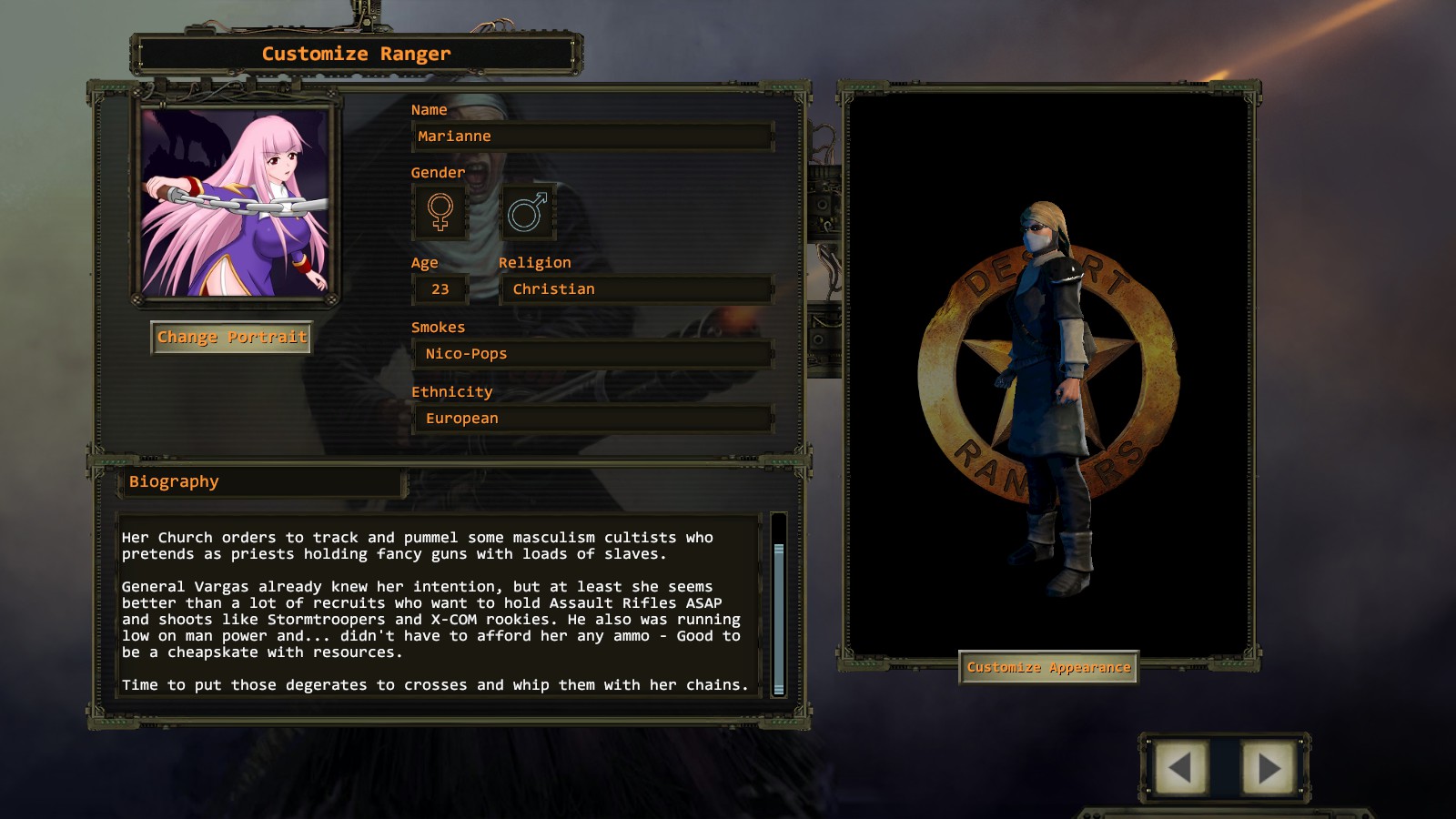 A combat priestess who gives no shit about the welfare of others, just beating mutants, infidels up by sticks and chains.

Her Church orders to track and pummel some masculism cultists who pretend as priests holding fancy guns with loads of slaves.

General Vargas already knew her intention, but at least she seems better than a lot of recruits who want to hold Assault Rifles ASAP and shoots like Stormtroopers and X-COM rookies. He also was running low on manpower and... didn't have to afford her any ammo - Good to be a cheapskate with resources.

Time to put those degenerates to crosses and whip them with her chains.

moral of her story - the bullet that hits, count. Not the one misses. 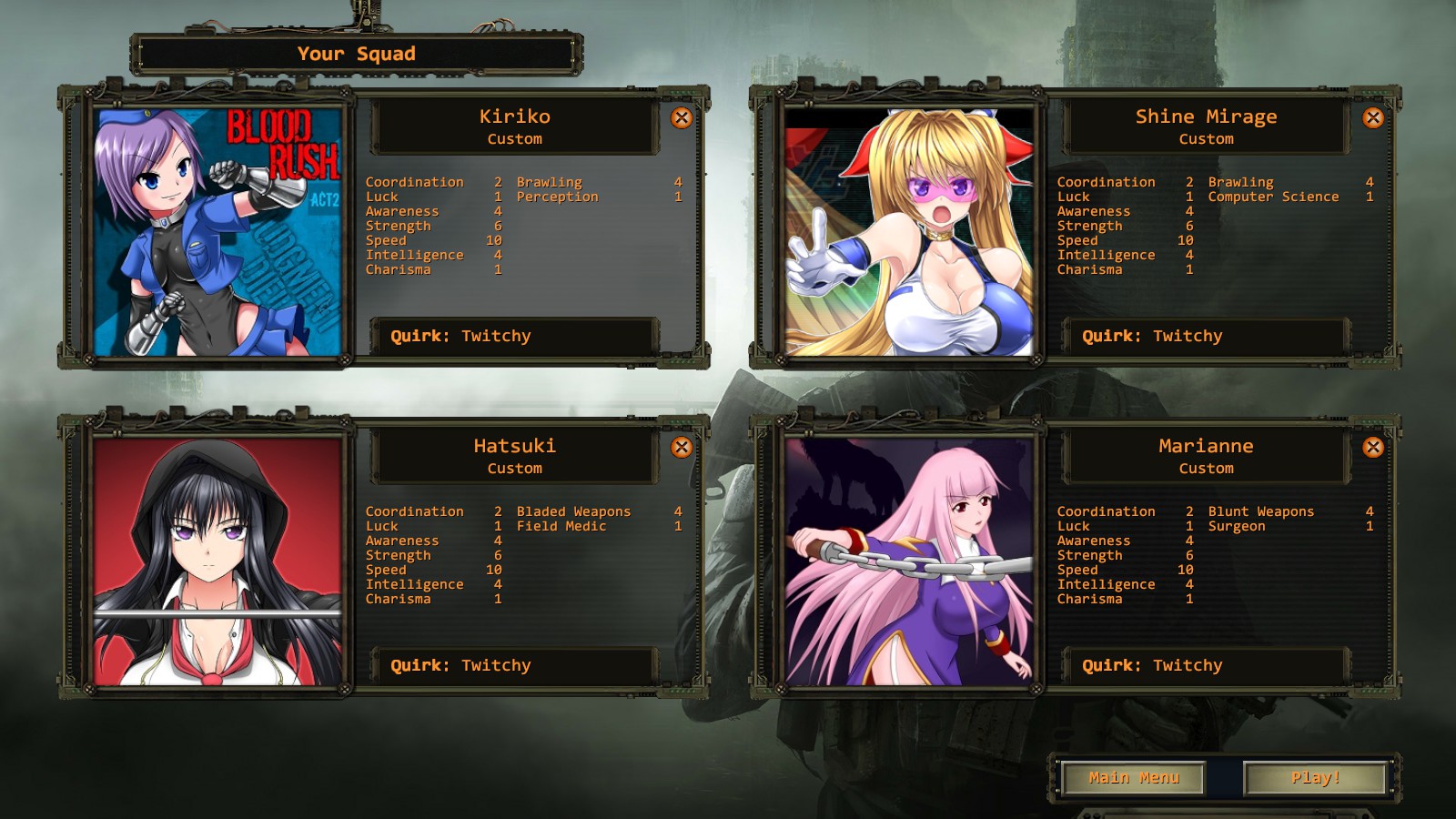 the moral of this squad - this is how General Vargas is low on manpower after taking over Citadel even Angela Deth commented "is this some kind of your Waifu squad? Weeb!" "At least they know how to cook sashimi, mashed potatoes on enemies!"

Lastly... This is for Supreme Jerk mode. gonna do fine... i guess.

Another biography about trolling Vargas.

by marjane
Another biography from rangers, which trolling the good guy Vargas. 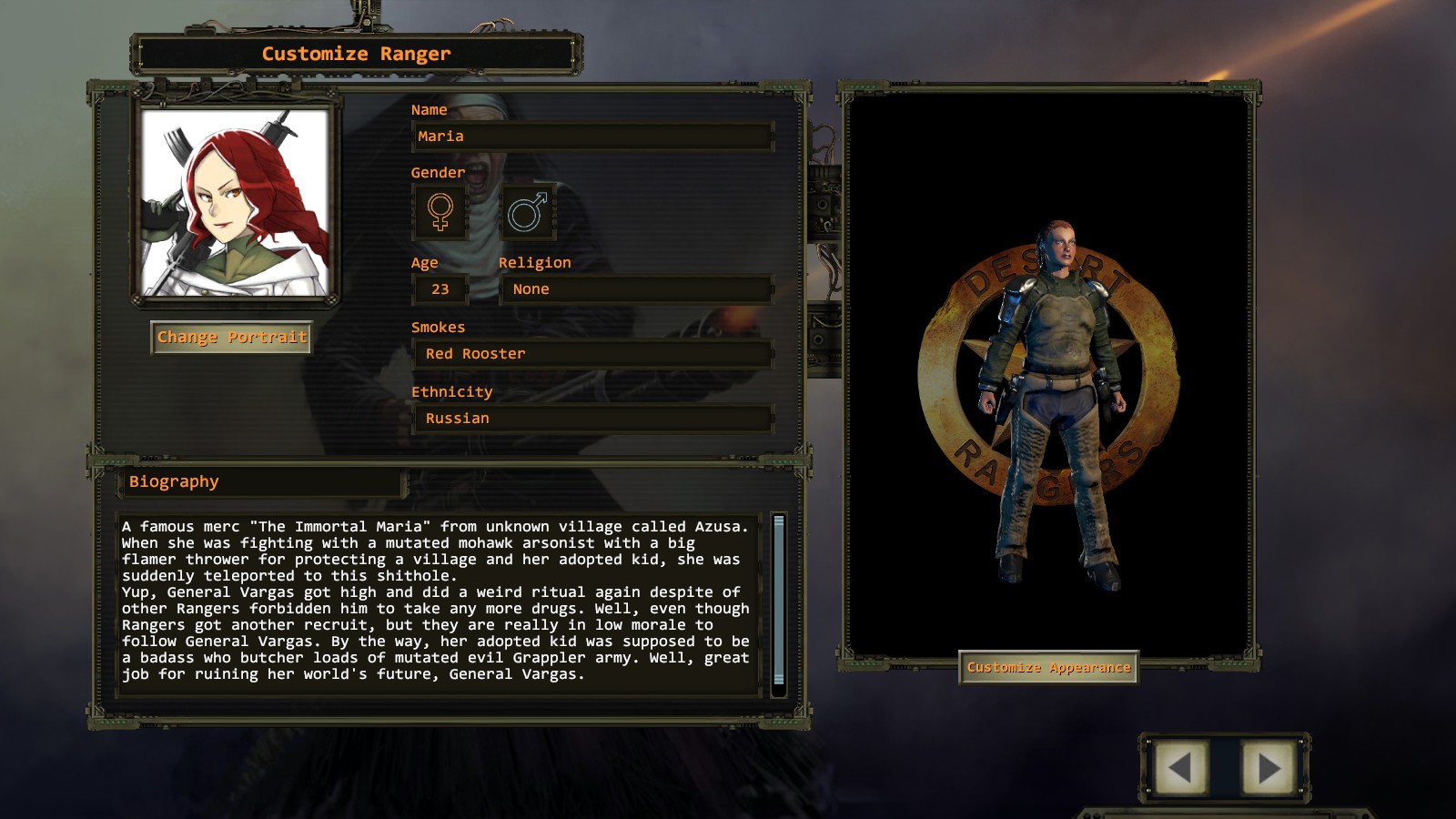 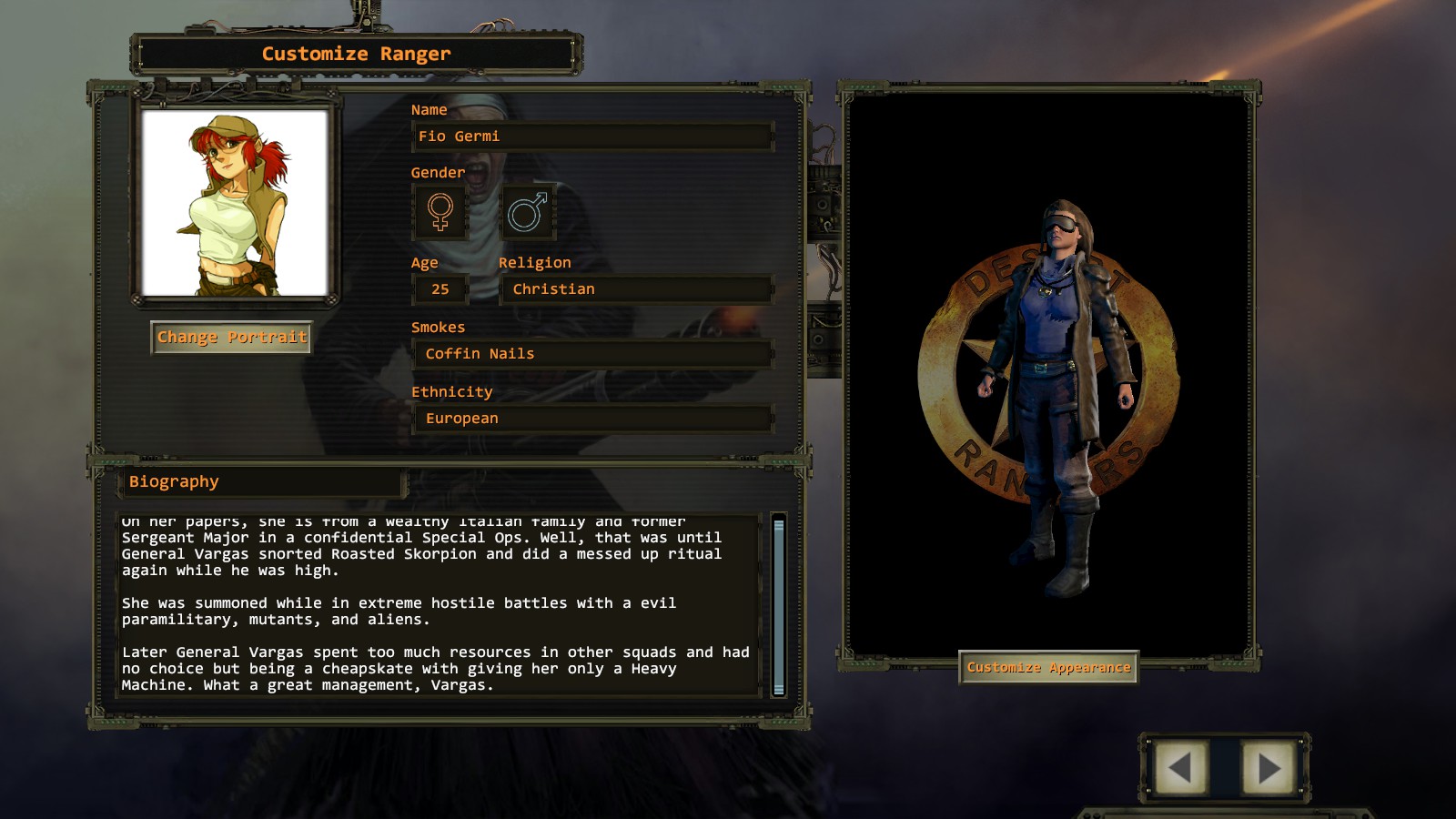 p.s. I do like General Vargas even though he supplied tiny resources with no cash at the start and forces my squad to be a do-gooder. Somehow the commander guy in Wasteland 1 is more forgiving, less judgemental and supplies a lot(mostly cheap stuff, but seems generous) despite only promoting my squad based on quantity & quality of killing, not solving problems from other people. Some of his dialogues and personality are not perfect, but charming in some moments.

by Grohal
I like your creativity, even though it is a bit off my personal taste.

Thanks. I know it is kinda strange way... normally i don't do this style a lot. just being silly
All times are UTC-07:00
Page 1 of 1
Powered by phpBB® Forum Software © phpBB Limited
https://www.phpbb.com/