Executor_ wrote: ↑
March 28th, 2018, 3:57 pm
The Gunner perk, as per inXile's implementation, affects all ranged weapons that have burst fire.

As for the perk text showing up erroneously on weapons that don't have any burst fire mode: I'll try to fix that in 0.9.5 by adding a new field to allowedItems.

You are right. I resolved this problem by making the perk work only with Assault Rifles.
Top

Hi Executor.
I think, that I found another bug of DELTA patch - sometimes enemies do extra large damage to squad members (Normal Difficulty).

Testing without DELTA give me the numbers below 300 even with crits.

Can it be something similar to the previous problem with double damage from PC to NPC, when armorPen >= target's armor?

And again thanks for the quick fix.

P.S. A small follow-up question on another topic. Is that okay? 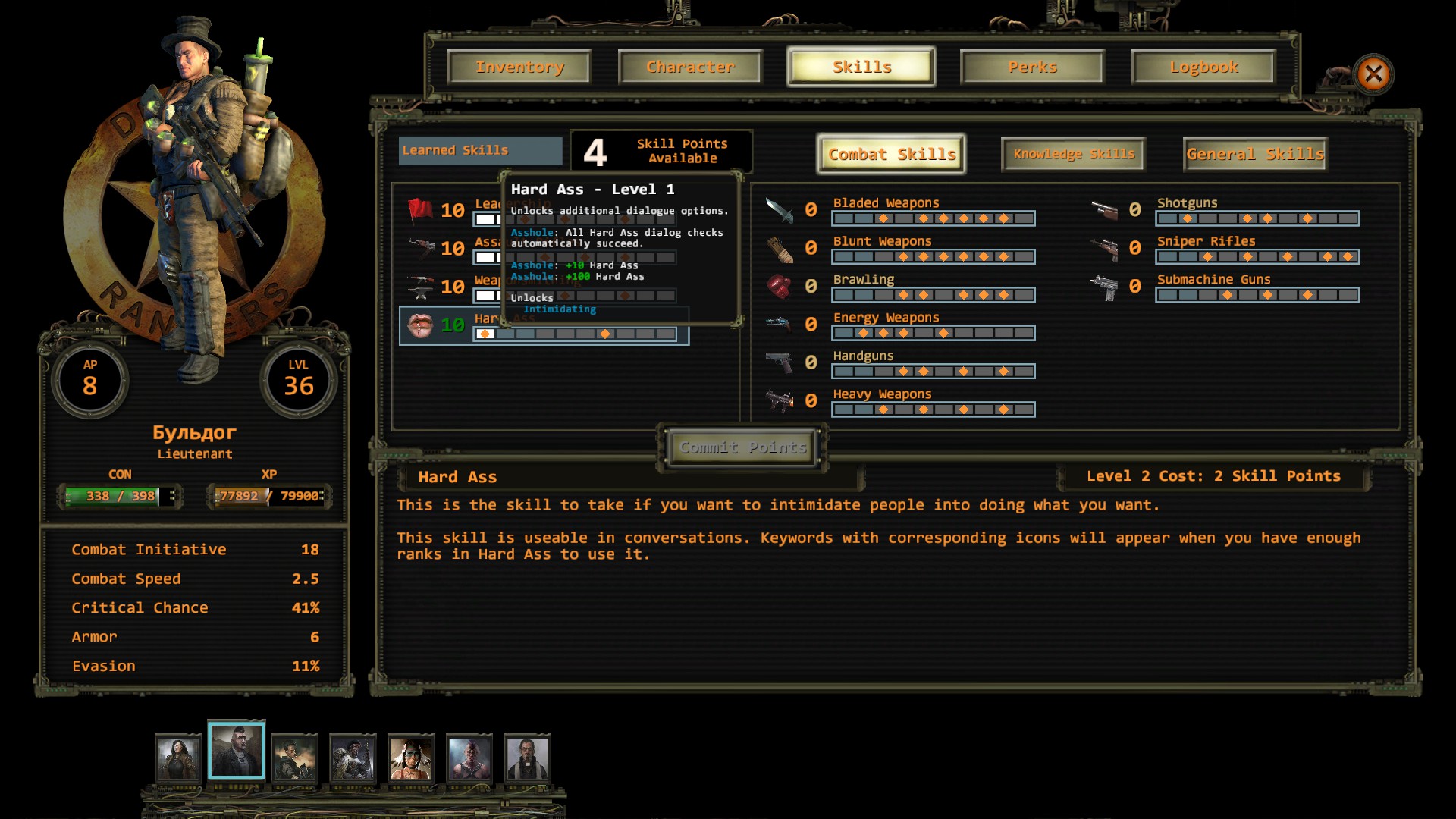 Thought I fixed that issue with the Asshole quirk. Guess not. I'll look into it again for 0.9.5, since I'm redoing some of the code for Attributes/Skills anyway.
Top

Depending on the bug, I might be able to backport the fix to 0.9.4. It's solely a display issue, right? Or have you had any problems using Hard Ass?
Top

Relatively new to the game & brand new to this forum, registered today to respond to this thread. First, Executor_, it's pretty awesome that this is still in active development. Thanks!

I installed your latest release over the weekend, to enable support for scramjetbooster's Character Creation Dress Up mod. Game is otherwise unchanged from the latest Steam version. I started a new game from scratch after installing both mods.

Anyway, I'm seeing an issue similar to that reported by ss7877. I figured an additional bug report could help narrow down the problem.

I don't know exactly when the issue appeared, but I noticed it sometime after I invested additional points in social skills and picked up the associated perks at level 4 (level 8 for Angela Deth).

This seems to be a display issue only, but I've only had one Hard* dialogue check since I noticed the problem (it succeeded), so I don't really have enough info to say for sure one way or another.

Do you have a save you could email me please, Dr_Robert? Because I haven't been able to replicate the bug and I can't tell what's causing it just from the screenshots.

Saved games are stored in the "Documents\My Games\Wasteland2DC\Save Games" directory. My email address is executor115@hotmail.com
Top

No problem. I'll send you my current save today after work. Edit: sent.
Top

I think, it's solely a display issue.
Top

UPDATED GAME BUG FIXES
Temporary Attribute/Skill modifiers (such as those from items or StatusEffects) are not supposed to affect the progress bar, while permanent modifiers from Traits (ie. perks/quirks) should. The point cost to raise a Skill is never affected by either. A perk that increased a character's Intelligence score from 7 to 8 would also increase the amount of Skill points gained per level. A trinket or StatusEffect would not. Permanent modifiers also count towards the requirements for unlocking perks.
Top

Thanks, but I found another strange bug with DELTA patch (tested in 0.9.4i and 0.9.4h). No problem in original W2DC.
Salt Lake Park - trade with Alex Dupre 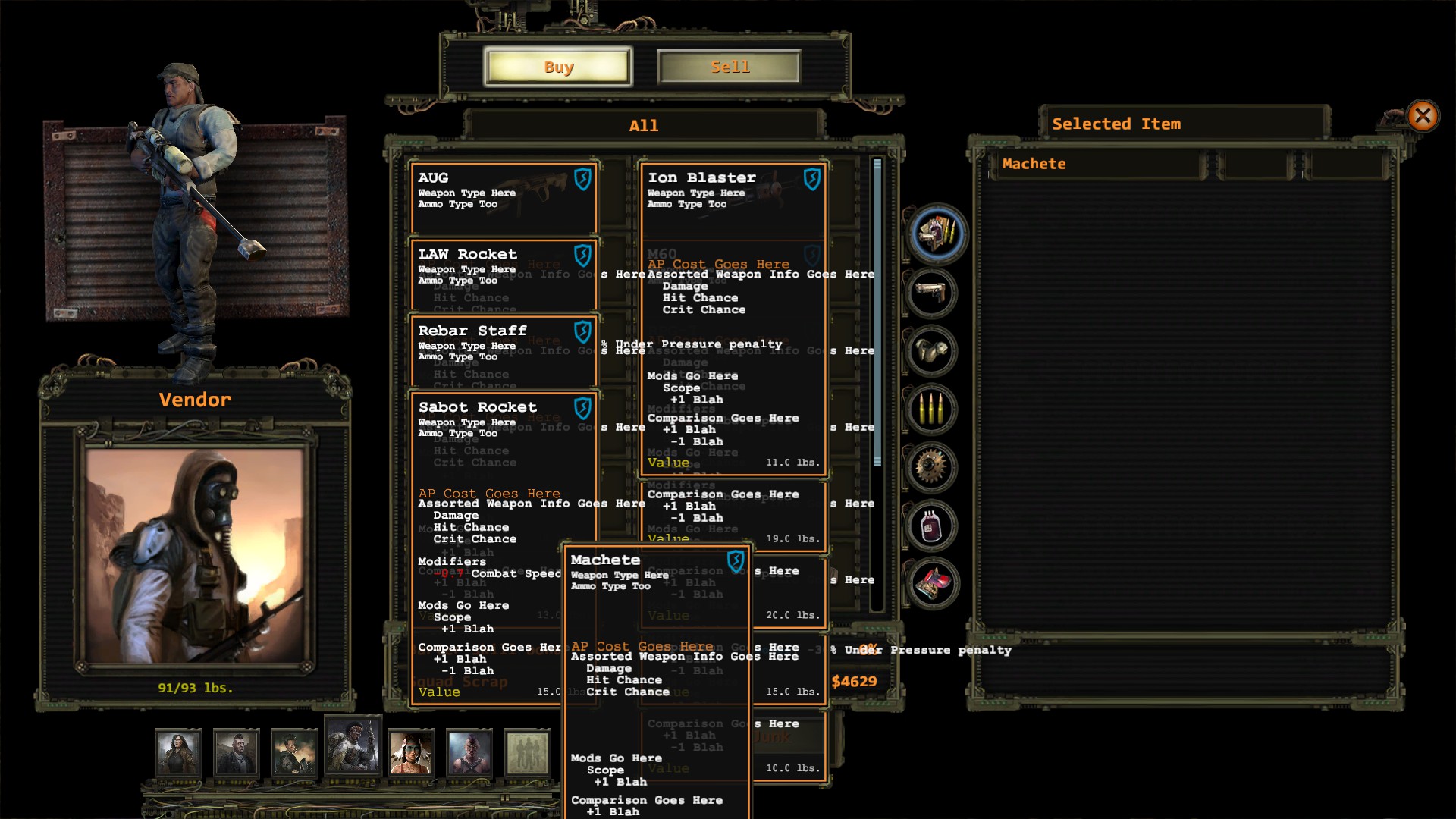 And thanks again. I'll test it when come to home.

If you check the "Mods\Export\" folder, there'll be a "LosAngeles\CA06_Hollywood\" directory once you load the map. Then it's just a matter of looking through the files in there to determine which you need to modify.

TO MODIFY THE CRATE BEHIND RAMBEAU
In "Mods\Import\LosAngeles\CA06_Hollywood\DropSet\", create a file named Tier_6_GunCrate_Rambeau.mson with the following contents:


I haven't tested these since I'd need a proper savegame from Hollywood, but they should work. *crosses fingers*
Top

Hi Executor, Is it possible to use veteran characters after applying Delta Patch?
Top

Everything from the base game should still work. Are you having any issues using veteran characters? If so, then it would be because I broke something.
Top

Executor_ wrote: ↑
April 11th, 2018, 5:15 am
If you check the "Mods\Export\" folder, there'll be a "LosAngeles\CA06_Hollywood\" directory once you load the map. Then it's just a matter of looking through the files in there to determine which you need to modify.

I haven't tested these since I'd need a proper savegame from Hollywood, but they should work. *crosses fingers*

Thanks. The method for Rambeau's vendor inventory is working if I load a save before first visit of Hollywood.
The only problem was the fact, that there were 2 The Mailinator in vendor's inventory.
I fixed that by making "minReplenish = 0 & maxReplenish = 0"

Executor_ wrote: ↑
April 13th, 2018, 12:51 pm
Everything from the base game should still work. Are you having any issues using veteran characters? If so, then it would be because I broke something.

Well I did some research, it is "normal" behaviour for Wasteland 2 when rangers are exported from folder where saves with older(in our case vanilla) version are present. In some cases deleting old-version saves helps, but not always unfortunately. I'll test it when will do complete walkthrough with my mod.
Top
Post Reply
407 posts

Users browsing this forum: No registered users and 3 guests